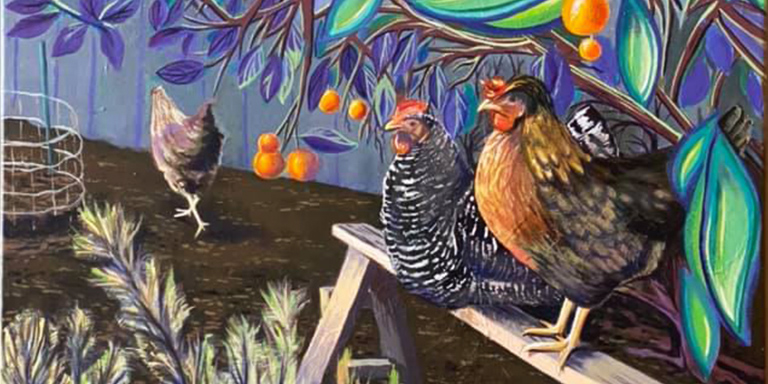 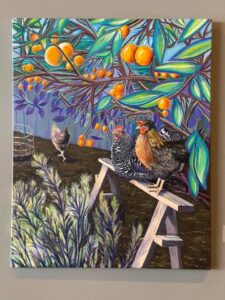 Kim Mazzilli
www.kmazzilli.com
After working on a communication arts degree at Virginia Commonwealth University in Richmond Virginia, Kim spent 15 years doing graphics, sign lettering, and large wall murals. Finishing a BA in art education at Flagler College in Saint Augustine Florida (and later a MsEd at Old Dominion University in Norfolk Virginia), Kim taught art in the public-school systems in Florida and Virginia for 20 years. Now retired, Kim spends her time being a grandmother and a studio artist at her home studio here in Moultrie. Kim creates hand-built pottery, collages, and paintings.

Joseph Mazzilli
Joseph dabbled in art since childhood, but without much in the way of formal training until retirement. While working toward his B.A. at Princeton University, he took two semesters of Life Sculpture with Joe Brown. He was as intrigued as much by Professor Brown as by the class. Brown was a former boxer with a glass eye, and with a rough demeanor that belied his ability to capture the grace of a ballerina posing au pointe, or the very souls of some of his famous subjects, such as Robert Frost, Thomas Wolfe, and Arthur Ashe.During his career in commercial construction management, Joseph only occasionally found time for art, with the hope of taking formal classes in retirement. Since retiring in Moultrie, Joseph has taken classes for the first couple of years with Thomas M. Thomson in Havana, FL, and for the next couple of years with Thomas’s brother Ron Thomson in Thomasville, GA.Joseph feels he still has a lot more to learn as an artist. But he senses that he has at least finally crossed that great divide, when starting a painting or drawing, between how he hopes it will turn out and how it actually turns out.